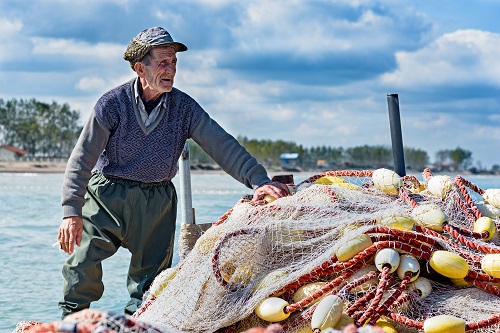 Monitor fishing gear, prevent accidental loss of nets, fight against plastics in the ocean, and generally help those involved in professional fishing to manage the maritime domain sustainably—those are the benefits of a new set of innovations to track and recover lost fishing gear at sea.

A consortium led by CLS, made up of fishermen from the Var department of France together with associations (Planète Mer, ReSeaclons), has unveiled new technologies for a connected and sustainable ocean. In the coming months, these solutions will be tested at sea; they will also facilitate circular economy initiatives. Professional deep-sea divers (Association Les Ressources Sous-Marines) will also take part in the project. Fishermen in the Mediterranean regularly call on them to recover fishing gear lost at the bottom of the sea.

Innovation for the seas and those who use them

Once the fishing gear is tagged and trackable, then an inventory of gear can be created. This will be very useful for finding and recovering lost gear, in accordance with current and future directives at national, European and international level.

Space Innovation: Connected objects are now available for the fishing industry thanks to the democratization of space technologies, new developments in space IoT in France, and the reduction of associated costs.

Located lost gear can then be recovered by experts in shallow water and complicated diving techniques.

Once recovered, the fishing gear can be transformed and given a second life through social and solidarity initiatives supported by the association RESEACLONS.

Innovation for Society: this project supports the creation of a circular economy program for collecting and recycling marine plastic waste.

A Consortium Committed to Innovation for the Fishing Industry

CLS, a subsidiary of CNES and CNP, is an international company that has been a pioneer in providing Earth observation and monitoring solutions since 1986. Its vision is to imagine and deploy innovative solutions to understand and protect our Planet and manage our resources sustainably. CLS employs 750 people at its headquarters in Toulouse and at its 25 other sites around the world. The company operates in 5 strategic industries: sustainable fisheries management, environmental monitoring & climate, maritime safety, fleet management, and energy & mining. Specifically, the company provides satellite services based on the location and collection of data (100,000 beacons are processed every month, drifting buoys, beacons equipping animals, fishing fleets, etc.), observation of oceans and continental waters (more than 20 instruments on board satellites deliver daily information to CLS on the world’s seas and oceans), and surveillance of land and sea activities (more than 10,000 radar images are processed and several hundred hours of flight time by UAVs are analyzed each year). Committed to a sustainable planet, the company works everyday for the Earth from space.

Based in Toulon, France, the Departmental Committee for Maritime Fisheries and Marine Aquaculture brings together more than 200 professional small-scale fishermen. Its members perpetuate the heritage of traditional fishing. This craft is a strong part of the identity of people on the Var coast, with fishermen who still earn a living from the sea. The CDPMEM is committed to preserving and developing these traditional trades. Professional fishing on the Var coast differs from other kinds of fishing in the French Mediterranean, due to the very small size of the continental shelf. As a result, there are no large industrial trawlers but only a few traditional Ganguis vessels, equipped with VMS terminals from CLS to prove to Europe their minimal impact on Neptune grass (Posidonia oceanica). This unique geography fosters the survival and development of traditional fishing methods (fishing with small boats & nets, traps, pots, longlines, lines, rods, etc.). These fishermen use a variety of fishing gears, adapting them to the seasons, weather conditions, target species, conditions for selling their catch, habitat and depth. This diversity of techniques reflects not only tradition, but also preserves the balance of fishing resources by changing with the seasons. The CDPMEM, a professional organization, is chaired by Pierre Morera, who has been a fisherman for 31 years. Pierre Morera was also named ombusdman in Salins (Hyères) in 2014. His goal is to restore the site to a fishing port, based on training young fishermen and promoting lesser-known species. Today, more than 1600 customers receive SMS messages telling them the time and the day for the local fish market with direct catches. This modern vision of the profession is innovative but also close to consumers. This vision is also supported by the CDPMEM.

Planète Mer is an incubator promoting solutions for the future of the Oceans. Its mission: To find a sustainable balance between marine life and human activities. Its fields of action: (1) Protect coastal biodiversity together WITH citizens, (2) Manage fishing resources together WITH fishermen, (3) Restore degraded ecosystems together WITH local populations. By involving all stakeholders and seeking practical solutions that can be reproduced and incorporated into public policies, we can best respond to the challenges to the marine environment. According to Planète Mer, a non-profit organization, there is no room for pessimism. The door to the future is open to imagination, to tests, to trials, to learn by doing, to start over, and above all the duty to never give up. As a true mediator and moderator for all the actors of the maritime environment, Planète Mer works for a sustainable co-management of our oceans. For 2 years now, Planète Mer and the CDPMEM-Var have been working closely with the Var’s fishing authorities on the PELA-Méd programme (Fishermen Committed to the Future of the Mediterranean) for the sustainable management of activities and resources.

Ressources Sous-marines is a non-profit association based in Marseilles, France. Its goals are to: promote knowledge about and preservation of marine species; participate in the development of studies on the marine environment; train scientists in underwater observation and intervention techniques (ROV) & professional diving; to research new sustainable technologies for marine breeding that respect the environment and ecosystems; and finally to raise awareness among young people about the future of the marine world in the Mediterranean and the great diversity of jobs working with the seas. As part of its mission, LRS works on the issue of lost fishing gear. It has developed innovative technologies, including a revolutionary underwater robot, or ROV, that is able to locate and tag lost fishing gear. It mission to fight against lost nets have several steps: create cartographic inventories and video databases, analysis to decide whether to recover them, develop recovery methods adapted to the context, and recovery campaigns to identify and recover lost gear in the waters off the coast of the Var and Maritime Alps departments in France.

The RESEACLONS association was born after the ReSeaclons pilot project from April to December 2018 by the Institut Marin du Seaquarium in the Gard department in France. It is the first French network for the collection and recovery of marine waste. Their collaborative approach brings together local stakeholders for a regional project to fight against marine waste. The aim is to create a collective momentum for environmental preservation and to develop collection and recycling solutions locally, while showcasing the contributors and encouraging action. In response to the enthusiasm generated and to meet the demand for spin-offs of the ReSeaclons project in France and abroad, the RESEACLONS association was created in March 2019. The strength of the ReSeaclons network is to facilitate the recycling of plastic waste that is currently not recovered, by offering innovative circular economy channels both locally and on a larger scale. ReSeaclons provides the organizational and operational link between the multiple actors of the value chain. The organization also works for continuous improvement and information exchange among the regions involved, in order to identify, propose, and improve the collection and recycling processes, while ensuring the market outlets for the materials.

Recognized worldwide as one of the leading institutes in marine science and technology, Ifremer works for both sustainable development and open science. It conducts research, innovates and produces expertise to protect and restore the ocean, to use its resources responsibly, and to share marine knowledge and data in order to create new opportunities for economic growth that respect the marine environment. Ifremer operates the French Oceanographic Fleet for the benefit of the national scientific community. It designs its own state-of-the-art gear and equipment to explore and observe the ocean, from the coastline to the open sea and from the abyss to the interface with the atmosphere. Its 1,500 researchers, engineers and technicians are advancing knowledge on one of the last unexplored frontiers of our planet, helping to inform public policy and innovation for a sustainable Blue Economy. Their mission is also to raise public awareness on maritime issues. Founded in 1984, Ifremer is a public establishment of an industrial and commercial nature (EPIC), with an annual budget of around €240 million.

CNES is the public agency responsible for proposing French space policy to the Government and implementing it within Europe. It designs and puts satellites into orbit and invents the space systems of tomorrow; it promotes the emergence of new services, useful in everyday life. CNES, created in 1961, has been at the origin of major space projects, launchers and satellites and is the natural partner of industry to drive innovation. CNES has nearly 2,500 employees, men and women who are passionate about space, which opens up infinite, innovative fields of application and operates in five areas: Ariane, science, observation, telecommunications and defense. CNES is a major player in technological innovation, economic development and France’s industrial policy. It also establishes scientific partnerships and is involved in numerous international cooperation projects. France, represented by CNES, is the main contributor to the European Space Agency (ESA).

Founded by Albert Frère and owned by members of his family, CNP is one of the two pillars of the Frère Group. Backed by a family shareholder base that provides stability and support, CNP favors the creation of long-term value by actively working alongside the management teams of the companies in which it is the majority or leading shareholder. Through its two pillars, CNP and GBL, the Frère Group manages revalued net assets of around €5.5 billion, deployed through a diversified portfolio of global companies that are leaders in their sectors.

This project has received funding from the Prefect of the Provence-Alpes-Côté d’Azur region in France, the Regional Government of Provence-Alpes Côte d’Azur, and ADEME, a French agency promoting the Green Energy transition