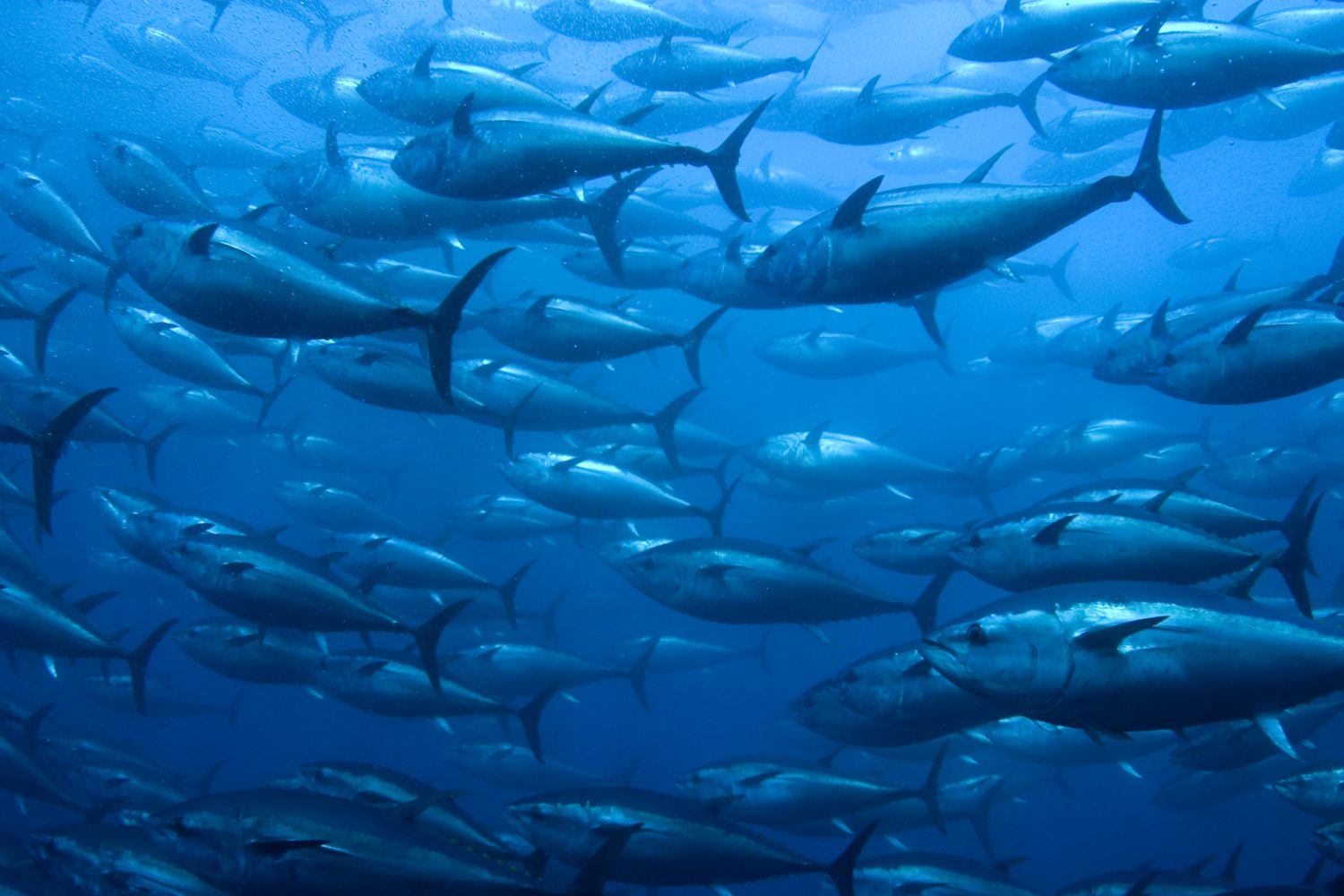 Most models to assess tuna populations have been largely based on catch report data, but climate change also affects the fish and their location. With a new method developed by scientists at Collecte Localisation Satellites (CLS), working with the Secretariat of the Pacific Community (SPC), it is now possible to forecast changes in stocks as well as simulate fishing effort scenarios based on the latest climate and oceanography data. This article explains how, using the method, the impact of global warming on tuna can be predicted, and asserts that some tuna species can adapt to climate change—but only if fishing efforts are kept within sustainable levels.

According to a recent global review of tuna stocks published by the International Sustainable Seafood Foundation (ISSF), about one third need stronger management measures to rebuild to healthy levels. However, when Tuna Commissions implement a harvest strategy for stock rebuilding, such as the one for Atlantic bluefin tuna, success can be compromised by two major threats: illegal, unreported, and unregulated (IUU) fishing and the impact of climate change.

Models and forecasts of tuna populations have become essential for managing stocks and ensuring the future of the industry, but they rely primarily on catch data and equilibrium assumptions. While fishing pressure certainly influences stock, so does the climate and the resulting changes in the ocean and the ecosystem in which fish live. These factors must be considered if we want to have the most accurate forecasts of fish stocks.

Already, we know that tuna distributions in the tropical Pacific are influenced by changes in the natural environment, such as the El Niño Southern Oscillation (ENSO), leading to large variations in the tuna catches in Pacific Island EEZs. However, while ENSO produces natural fluctuations, climate change results in longer-term trends that may be impossible to reverse. Depending on the amount of greenhouse gases released into the atmosphere by human activities, we may not be able to return to past and present states of tuna stock, at least over the coming decades, and maybe even centuries.

The rich tuna resources of the Western and Central Pacific Ocean (WCPO) supply 60% of the world’s tuna. Management of these resources by the Western and Central Pacific Fisheries Commission (WCPFC), the Parties to the Nauru Agreement (PNA), and the Pacific Islands Forum Fisheries Agency (FFA) depends on: (i) understanding the proportions of skipjack, yellowfin, and bigeye tuna, and South Pacific albacore within the exclusive economic zones (EEZs) of Pacific Island countries, Indonesia and the Philippines and in high seas areas; and ii) estimating catch levels that will optimise the economic and social benefits of tuna fishing. Therefore, determining how climate change is likely to alter the tuna catches has become a priority for regional organisations.

Stock forecasts are essential for fisheries and management organisations because they provide more accurate information in order to decide on investments, where to buy fishing licenses, and when and where to fish to preserve tuna populations.

Prediction: the Heart of the Matter

The Oceanic Fisheries Programme of the Secretariat of the Pacific Community (SPC) and the Marine Ecosystem Modelling Team at Collecte Localisation Satellites (CLS) have collaborated now for more than a decade to investigate these challenging questions.

The SPC standard assessment approach tries to determine the effect of fishing efforts on the spawning biomass and the recruits of each tuna species to establish target and limit reference points for total catches and harvest control rules. Yet, a different approach was needed to explore the issues of spatial management and climate impacts. Assessing the longterm environmental changes on tuna population dynamics requires mathematical models that combine the effects of environmental changes and fish spatial dynamics. To meet that need, a new modelling framework was created, called SEAPODYM (Spatial Ecosystem And Populations Dynamics Model).

The SEAPODYM model simulates the population dynamics of species such as tuna in time and in space. This prediction is based on physical and bio-geo-chemical conditions in the ocean that control the habitats and demography of the species, as well as fishing to account for its associated mortality. The model predicts distribution and abundance for each cohort of fish of the same age, with different behaviour rules depending on the life stage (larvae, juveniles, immature and adult fish). At CLS, we reconstructed the recent history of these stocks to determine the effects of El Niño events. In addition, real-time up to centennial forecasts have also been done using environmental variables from ocean physical models (like for weather forecasts) and future projections from Intergovernmental Panel on Climate Change (IPCC) models.

Based on our data and forecast models of marine population dynamics, we expect that populations such as Albacore and BigEye tuna will tend to extend their summer migrations towards the North Atlantic. As part of the European research project ATLANTOS, and operational version of our Seapodym model for albacore tuna has been set up to monitor these changes.

Figure 1: Fish Stocks in near Real-Time

Figure 2: Shifts in the Pacific Ocean

The Science of El Niño and Pacific Skipjack Stock

The El Niño Southern Oscillation (ENSO) has a major impact on tuna fisheries in the Pacific and Indian Oceans. With warm anomalies in the central and eastern equatorial Pacific surface waters during the El Niño (warm) phases, the habitat favourable to skipjack is shifting from the western fishing grounds (Papua New Guinea and the Solomon Islands) to the central region. In addition to temperature, El Niño also impacts currents and primary production in the Pacific, especially in the equatorial region.

Under normal conditions and during a La Niña (cold) phase, trade winds generate a divergence at the Equator while pushing water masses from east to west. To fill the gap, cold, deep ocean waters rich in nutrients move toward the surface, increasing primary production with photosynthesis. This is called upwelling and enhances the food chain, ultimately feeding tuna populations. With El Niño, trade winds are weaker and the warmer waters that accumulate in the west, which we observe from satellite images, move towards the central and eastern Pacific. El Niño was also predicted to affect larval survival and thus the availability of young tuna in fish stocks. This can occur for skipjack in the central Pacific and yellowfin tuna off the Mexican coast and more generally in the eastern Pacific.

Tuna populations, as well as fishermen, follow these movements, which are tracked in near real-time using the model forecast system developed by CLS (Figure 1). The largest tuna fishery in the world targeting skipjack and yellowfin redistributes its fishing efforts towards the central Pacific at the peak of El Niño events. Currently, the 2017-18 La Niña event is coming to an end and the seasonal forecast has returned to neutral conditions.

To predict the impact of global warming on tuna, scenarios from the IPCC were introduced into our model to simulate the changes in populations. We used the IPCC’s most pessimistic scenario (i.e., ‘business as usual’), which assumes that the rise in greenhouse gas emissions will remain constant over the coming decades. We ran simulations of climate change with and without fishing pressure to identify the separate effects of each. A first series of simulations and studies was done on the four Pacific tuna species: skipjack, yellowfin, bigeye and South Pacific albacore, with the following results:

The forecasts point to declining abundance in the western Pacific Ocean and/or distribution shifts towards the eastern Pacific for the tropical tuna species skipjack, yellowfin and bigeye (Figure 2). These changes are driven largely by the less favorable spawning grounds in the western equatorial Pacific. The surface water temperature in the western Pacific warm pool exceeds the current optimal spawning temperature value estimated from historical data. In addition, warmer waters are linked with water stratification leading to a decrease in primary production, which is the basis of the food web providing microscopic prey for tuna larvae and then larger ones for juveniles and adult fish.

For skipjack and yellowfin, the decrease of abundance in the west is compensated for by an increase in the central-eastern Pacific Ocean, where productivity is projected to remain relatively high and in a favourable temperature range for these species.

For the more temperate South Pacific albacore tuna, the projected change is different: current spawning grounds are predicted to shrink, but a new one should emerge in the north Tasman Sea from 2060. Thus, to a certain degree, tuna are able to adapt to global warming and move to other regions where the temperature and productivity are favourable for spawning, and starting in 2060, south Pacific albacore tuna stock should rise again–provided that there are still tuna left to spawn.

The scenario for bigeye tuna is the most alarming: even if they stay in the eastern Pacific, all simulations up to now point to a continuous decline.

The increasing concentration of carbon dioxide in the atmosphere causing climate change is also changing the chemical equilibrium of oceans, where it is causing acidification. The very first laboratory studies to explore the impact of ocean acidification on tuna (yellowfin) larvae have been included in SEAPODYM’s projections. Results indicated rather minimal effects, with a maximum of 10-15% reduction in tuna larvae abundance in the eastern Pacific at the end of the century in the worst-case scenario.

All these forecasts are based on environmental changes without the fishing impact. Adding fishing and related mortality in the model means we had to determine the fishing scenario for the future. We assumed fishing efforts would remain the same and took an average of the effort over the last five years. The simulations combining both climate and fishing showed that fishing will remain the major determinant of tuna stocks, and that the combination of these two effects should lead to a strong decline in the western equatorial Pacific. In conclusion, tuna stocks can likely adapt to global warming and survive, but only on the condition that we carefully manage fishing mortality and include climate change impacts in tuna management, e.g., in decadal forecasts used to determine the best management regimes. These results should be regularly updated following the progress of new fishery and climate science models.

This article first appeared in the special Climate Change issue of Infofish Magazine.

Dr. Patrick Lehodey is head of the Marine Ecosystems Modelling team at Collecte Localisation Satellites (CLS), France. Before joining CLS in 2006, he worked more than 10 years for the Oceanic Fisheries Programme of the Secretariat of the Pacific Community, where he started to develop the model SEAPODYM. He was also a member of the Scientific Steering Comitee of GLOBEC and co-chair of GLOBEC/CLIOTOP (Climate Impacts on Oceanic Top Predators) until 2010.

Dr. Inna Senina is an expert in Mathematical Sciences (Rostov State University, Russia) and fish population dynamics modelling. She started working on SEAPODYM with Patrick Lehodey in 2004, first as an Assistant Researcher for the Pelagic Fisheries Research Program at the University of Hawaii (USA). She joined the ecosystem modelling team at CLS in 2007.